1686: Bored with village life, 18 year old Abby O’Donnell longs to sail away into the exciting world beyond the ocean. She has little hope of that ever happening until Lord Harry Rushmount, a man unlike any she’s ever met, sails into Providence harbor. Abby is convinced fate has played a role in bringing Harry to her. When she learns that twenty years earlier her mother killed Harry’s father, she hugs the dark secret to her heart and risking all, flees with Harry on a voyage of discovery.

She soon learns that the allure of the great wide world is marred by soul-stunting poverty, piracy, slavery—and searing rage when Harry learns the truth about his father’s death. Heart-broken and fearing she has lost Harry forever, Abby returns to the once despised village where she gives birth to their child. But Harry, too, has been on a voyage of discovery and realizes the future is what matters, not the past. Incomplete without Abby, he follows her to the colonies where he hopes to build a new life. The question is will Abby welcome him back with open an open heart and open arms.

The Unlikely Heroes, by Carla Kelly

My Wayward Lady, by Evelyn Richardson 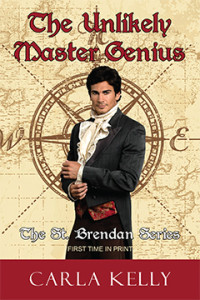