Looking for Christmas-themed stories? Here are two Regency romance story collections by award-winning author Carla Kelly and a mystery in Robert J. Ray‘s classic hard-boiled Matt Murdock series. If you love Carla’s Christmas stories, check out Camel Press’s reprints of her other Regencies as well as her historical romances set in the Santa Fe area. Guaranteed to warm your heart in any season.

Historical romances: Daughter of Fortune , The Spanish Brand series (The Double Cross /Marco and the Devil’s Bargain /Paloma and the Horse Traders and The Star in the Meadow (coming in February, 2017).
Regency romances: Miss Billings Treads the Boards, Miss Chartley’s Guided Tour, Miss Milton Speaks Her Mind, Miss Whittier Makes a List, With This Ring, and Mrs. McVinnie’s London Season 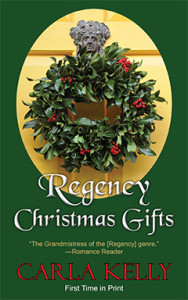 The Lasting Gift: Christmas approaches, and Mary Ann Poole has little to anticipate. Her daughter Beth was born just after the death in battle of her father seven years earlier, and never knew Lt. Poole. Mary Ann has just lost her job. As a future in the poorhouse looms, she receives a package that was misdirected from the post office. Unable to afford return postage, the Pooles pay a visit to the sender, Thomas Jenkins, a retired sailing master in nearby Plymouth who is bored by life ashore. Thomas takes an immediate interest in the pretty widow and her bright daughter. He decides Mrs. Poole’s welfare is just the right charitable Christmas project to banish boredom while he searches for a way to return to sea. Soon he has a new dilemma: now that he has met Mary Ann Poole, does he really want to go sailing again?

Faithfully Yours: John McPherson left Dumfries, Scotland, as an impoverished, neglected boy, determined to make his fortune in North America. Make it he did, thanks to his facility with languages and business savvy. Now he is home after ten years for a visit. He hopes to marry Margaret Patterson, the lovely correspondent he left behind, and who has exchanged letters with him ever since. But Margaret, daughter of a prosperous merchant, is engaged to another. His faithful correspondent has really been Sally Wilson, pretending to be Margaret, who is not quite the person John thought she was. Just the daughter of a minister, Sally never judged John for his poverty and even saw him off on his adventures. But how could he possibly know that?

Lucy’s Bang-Up Christmas: Lucinda Danforth is downhearted this Christmas, her first since the end of the Napoleonic Wars. Her sister is getting married on Christmas Eve, and Papa Danforth has been trying to keep events on an even keel ever since the death of his dear wife. Overwhelmed by wedding preparations, he tells Lucy to forget about Christmas traditions this year. But Lucy wants Christmas, too. Enter Lucy’s second cousin Miles Bledsoe, Oxford scholar, who wangles an invitation to the Danforth’s home. He’s happy to help out, and even happier to see Lucy Danforth. Thoughts of Lucy have been distracting him from his studies of late. He might be in love, and he wants to test his theory. Along the way, Lucy and Miles seek to honor the memory of Lucy’s departed mother by helping others, in this case, a war widow and her children. 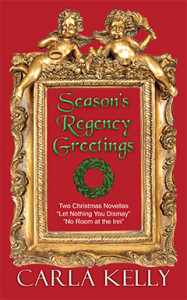 “Let Nothing You Dismay”: In 1810 England, Cecilia Ambrose is an oddity at the Bath academy for young ladies where she teaches. Although gently raised, she is half-Egyptian, and at age twenty-eight believes she will never marry. With Christmas only days away, Cecilia has agreed to escort twelve-year-old Lucinda back to Chase Hall in York. The girl’s parents have been delayed, and in their place is Lucinda’s uncle, Lord Trevor Chase, who has been charged to chaperone Lucinda and her siblings. The bachelor black sheep of the family, Trevor scandalized his own class by becoming a barrister in London and championing the poor. Cecilia’s plan to return to Bath is thwarted when fire breaks out in the mansion, and she reluctantly agrees to stay a while longer. Will her delay prove to be Trevor Chase’s salvation? First published in 2003.

“No Room at the Inn”: With Christmas, 1815, around the corner, Lady Mary is told that she is not the daughter of an earl, but simply Mary McIntyre, the base-born orphan Lord and Lady Davy reared as their own. After her true parentage is revealed, Mary must leave Coventry for Yorkshire and the farm of her new-found grandmother. Her travel companions are the snobbish son of Lord Davy’s estate steward, Thomas Shepard, and his family. Heavy snowfall soon blocks the roads, and there is no room at the inn, so the little group is forced to seek shelter in the home of Joseph Shepard, Thomas’ estranged brother, a handsome man Mary remembers fondly from childhood. In this “vulgar” mansion belonging to a common businessman, Mary will discover that happiness has little to do with titles or income, and that Christmas works its own magic. First published in 2002. 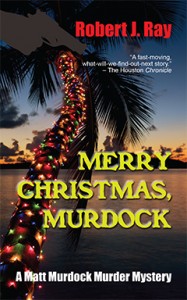 Christmastime is here, and weary-but-wise private-eye Matt Murdock is short on funds and holiday spirit. There are no white Christmases in Newport Beach, California, but there are soggy ones. One rainy evening at the Xanadu Mall, a down-on-his-luck mystery writer named Marvin Holly meets a runaway teenager and autographs her book. As they exit the mall, they encounter the headlights of a speeding car. In the aftermath the author is missing and the girl is in a coma.

On an earlier case, Murdock befriended a precocious teenager named Cindy. Cindy is the product of a broken home, a very wealthy one, and her people would rather break Murdock’s face than accept his help finding out what happened to her biological father—the missing author from Xanadu mall. Meanwhile Murdock has been hired to find out why Heather, the daughter of a sexy but tightly wound senator named Jane Blasingame, was injured in a hit-and-run. Is she the teenager last seen with Cindy’s father? And was Heather really a member of the notorious San Diego gang, a group of wholesome looking youngsters who prey on unsuspecting salesmen?

Cindy’s mother and the fabulously wealthy Duke family—the clan of Cindy’s uncle—were not fans of Marvin Holly’s work … or the man himself. They certainly don’t want Murdock to locate him. How are Holly’s disappearance and the hit-and-run connected? Will the lovely senator fall for Murdock’s rugged charms? If the holidays don’t kill Murdock then this case will.

If you like this title, check out Ray’s other Murdock mysteries. Matt is a heck of a nice guy, except if you’re a rotten apple, and justice always prevails.

Mistress of Music, by Evelyn Richardson