Father Mike has battled demons, assassins, serial killers and powerful elementals, all sent by the infamous and evil Deschamps family. Rich and powerful beyond belief, they are the heirs to the legendary Judas Iscariot, the man who betrayed Christ, and have vowed to destroy Father Mike at all costs.

Led by Burke Deschamps, a man back from the dead, the forces of evil are beginning the last phase of a centuries long plan to bring Lucifer to this world. If they succeed, humanity as we know it doesn’t stand a chance in Hell.

Mike leads a resistance force of true believers to fight against Satan’s minions on earth. His allies: Cain, the First Murderer, The Pope, and ax-wielding Valkyrie and the Knights Templar. Pray that they are enough.

The Judas Revelation is the third book in the Judas Line Chronicles.

“This delightful Catholicism-infused quest fantasy stars a likable and original duo… Stone’s depiction of magic is realistic and intelligent and his treatment of Catholicism refreshingly informed and three-dimensional. Even the obligatory near-apocalyptic ending is coherent, surprising, and exciting.” —Publisher’s Weekly

Born in Helsinki, Finland, Mark Everett Stone arrived in the U.S. at a young age and promptly dove into the world of the fantastic. Starting at age seven with The Iliad and The Odyssey, he went on to consume every scrap of Norse Mythology he could get his grubby little paws on. At age thirteen he graduated to Tolkien and Heinlein, building up a book collection that soon rivaled the local public library’s. In college Mark majored in Journalism and minored in English. Mark lives in California with his amazingly patient wife, Brandie, and their two sons, Aeden and Gabriel. 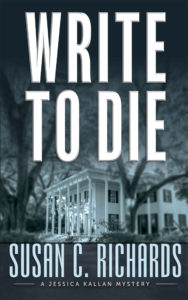 Write to Die, by Susan Richards

All Done With It, by Maggie Toussaint

Dreamed It, by Maggie Toussaint